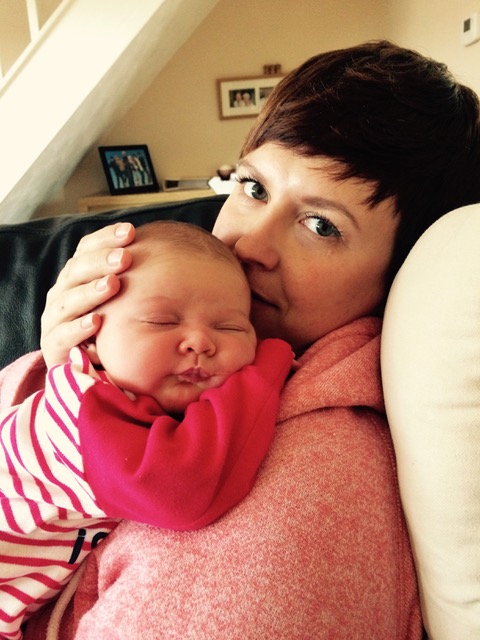 I fell pregnant with Alex in July 2014.
I was fortunate to have my step mum as my midwife which was great.
I suffered with a lot of pelvic pain during my pregnancy with Alex – It started at just 10 weeks. My job didn’t help as I was district nursing. This meant getting in and out of my car all day and a lot of getting up and down off the floor doing leg dressings.
I went on maternity leave 10 weeks before my due date as I couldn’t take anymore.

Alex was due on April 26th 2015 (our anniversary). I wanted to have a home birth as the thought of being at home in my own surroundings felt right.
Of course she was late, by almost a week. My step mum carried out two stretch and sweeps to get things going. The second one worked and on May 2nd my waters went.

I called my step mum and let her know they had broken and that there seemed to some brown/black blobs coming out with the water.
Once my step mum arrived she checked my pads and told me it was meconium – the baby had done a poo. I had also not really been contracting so it was off to the hospital to be assessed. I was checked over by a consultant who wanted me to have a Syntocin drip to get the contractions going. I was advised to have an epidural as the drip can bring on quite strong contractions sooner than natural ones. This meant I was now confined to the bed so no yoga ball or walking around. It was a long labour. Alex’s heart rate started to do weird and wonderful things so they attached a STAN machine to the top of her head which also gave them ECG readings. When it finally came to start pushing I pushed for an hour and 20 mins with no joy. My mum, step mum and husband were all there giving so much encouragement and support.

Alex’s heart rate went up so they made the decision to use forceps but in theatre in case she didn’t come out and they would need to do an emergency c-section. Everything happened so quickly. My husband came down to theatre with me. I was really nervous about the possibility of a c-section but at this point I just wanted her out safely. All the staff in theatre were incredible. Luckily Alex came out with one pull on the forceps. After 18 hours of labour she was here and was a healthy 8lb 11oz. I was stitched up and sent out into recovery where we did skin to skin and her first feed.
The midwife took our observations and found that we both had a temperature.

A paediatrician came by and explained that because we both had a temperature we needed IV antibiotics just to be cautious.
I was quite upset as Alex was taken away to be cannulated and it meant we had to stay in hospital for 3 more days!! One good thing was that Simon and my mum were able to stay with me for support over night.
Although this was not the birth I had hoped for the staff on Southend maternity unit were amazing!!

After Alex’s birth I felt I had failed as a woman and a mother as I was not able to push her out myself. I think we just put too much pressure on ourselves to have the “perfect” birth. It bothered me for a long time.

Faye’s feelings at the end of her birth story highlights how a lot of women feel if they’ve had assistance or interventions. However sometimes in life we will all need help from time to time, this was one of those occasions. No mother has ever and will ever fail bringing their baby into the world. Without the mother and her role in being there, the birth would not happen. Clare xx

This site uses Akismet to reduce spam. Learn how your comment data is processed.

[mc4wp_form id=”177″]
Your details will never be shared and you may unsubscribe at anytime.